Software-defined networking (SDN) is an approach to networking in which control is decoupled from hardware and given to a software application called a controller. When a packet arrives at a switch in a conventional network, rules built into the switch's proprietary firmware tell the switch where to forward the packet. The switch sends every packet going to the same destination along the same path -- and treats all the packets the exact same way. In the enterprise, smart switches designed with application-specific integrated circuits (ASICs) are sophisticated enough to recognize different types of packets and treat them differently, but such switches can be quite expensive. The goal of SDN is to allow network engineers and administrators respond quickly to changing business requirements. In a software-defined network, a network administrator can shape traffic from a centralized control console without having to touch individual switches. The administrator can change any network switch's rules when necessary -- prioritizing, de-prioritizing or even blocking specific types of packets with a very granular level of control. This is especially helpful in a cloud computing multi-tenant architecture because it allows the administrator to manage traffic loads in a flexible and more efficient manner. Essentially, this allows the administrator to use less expensive, commodity switches and have more control over network traffic flow than ever before.

The Benefits of SDN
With a centralized, programmable network that can automatically and dynamically address changing requirements, SDN can:
1. Reduce CapEx: reducing the need to purchase purpose-built, ASIC-based networking hardware and supporting pay-as-you-grow models to eliminate wasteful overprovisioning.
2. Reduce OpEX: enabling algorithm control of the network, through network elements that are increasingly programmable, that makes it easier to design, deploy, manage and scale networks. The ability to automate provisioning and orchestration not only reduces overall management time, but also the chance for human error to optimize service availability and reliability.
3. Deliver Agility and Flexibility: helping organizations rapidly deploy new applications, services and infrastructure to quickly meet their changing business goals and objectives.
4. Enable Innovation: enabling organizations to create new types of applications, services and business models that can create new revenue streams and more value from the network

1. SDN Creates New Revenue Streams
SDN reduces both capital and operating expense by simplifying and automating management, avoiding over-provisioning, and reducing human error, (which is the most common cause of network configuration failures).  Further, it allows you to offer new features and functions that would be very difficult or prohibitively expensive on your current data center network.  A good example was given at the Open Ethernet Forum, when Verizon described how they plan to use SDN for better quality downloads of streaming video.  Since SDN controllers potentially have access to resources outside the network, such as the type of encoding used on a video file, they can adjust the network provisioning to accommodate a 3D high definition video vs a home movie of your cat, dynamically giving each one the appropriate amount of network resources. The result is a better viewing experience than you’d get over someone else’s network.

2) SDN Guarantees Better Quality of Service
This is a consequence of centralized, programmable management; SDN can view the entire network topology, not just the next hop as in conventional networks.  Also, today’s network treats switches and routers as if they were a “one size fits all” appliance.  It’s up to a highly skilled network administrator to translate application requirements into terms the network operating system can implement. Often these translations are approximations at best, resulting in poor utilization of network resources.  By creating the equivalent of a single operating system for the entire network, SDN changes the game, allowing us to program network configurations.  And if we can program something, we can automate it and eventually optimize it.  We can dynamically create service chains, or virtual paths through the network which interconnect firewalls, load balancers, and other functions. That’s what we mean by an application aware network.   For example, SDN adopters such as Tervela (who does global financial trading and risk analysis) and Selerity (who provides ultra low latency transaction processing) require high availability disjoint paths through their network and consistently low latency. SDN allows them to program alternate end-to-end paths in advance; if a network link fails, the recovery time is over ten times faster than conventional Ethernet.

3) SDN Provides Faster Time to Value
This is a result of SDN making updates in software, rather than hardware.  You wouldn’t virtualize your servers or storage if it meant sending a technician with a screwdriver to reconfigure circuit boards every day.  And yet, during a presentation at the 2013 OFC/NFOEC conference, a Cisco Senior VP said that it currently takes 5 days to fully bring a multi-tier workload online, including configuring network appliances, storage, and more.  SDN allows you to create, modify, and remove virtual network configurations in minutes, not days; with overlays like DOVE, you never have to touch the underlying IP switches. We can better integrate networking with servers and storage to create rapidly deployable, turnkey solutions (like IBM PureSystems).  The same holds true for interconnecting multiple data centers.  Reprovisioning the WAN currently takes days or weeks, but it’s possible to orchestrate the networks within and between data centers from a common controller, reducing this time to minutes (some of IBM’s work in this area will be published this summer, in collaboration with the New York State Center for Cloud Computing & Analytics). 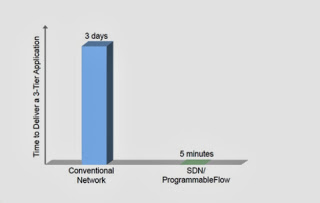 4) SDN Provides Better Security
This is a bit more subtle, but makes sense when you think about it.  SDN protocols such as OpenFlow can be used as policy-based packet filters, diverting traffic from know “black lists” of suspect data sources.  SDN overlays like DOVE (an IETF industry standard, now available as part of the IBM Software Defined Network for Virtual Environments) allow you to create huge amounts of VLANs, and scale them to large networks with a network connectivity service.  Combined with virtual hypervisor switches like the IBM 5000v you can drive isolated multi-tenancy all the way back into the server hypervisor.  Further, a centralized SDN controller cluster is easier to defend than a network with thousands of switches running their own independent operating system.  SDN should make it easier to pass security compliance audits, since the entire  network policy is contained in one place.  Virtual security appliances can quickly be provisioned as waypoints on a DOVE overlay network.

5) SDN Provides an Open, Standards-Based Environment
There are many benefits from using open source Linux server operating systems.  Through the Linux Foundation, SDN is building the equivalent of Linux for the data network, with the same expected benefits.  The recently announced OpenDaylight project, the largest open source effort in history, provides an open source community to accelerate SDN adoption.  IBM is a long standing supporter of open standards, from our early efforts with Linux on the mainframe to the Open Data Center Interoperable Network (ODIN), and we’ve published extensive interop testing with other vendor’s networking products.  As a founding member of OpenDaylight, we’re pleased to bring this same approach to data center networking.  This ecosystem creates a wider variety of new features for your network faster than ever before (analogous to the app store for your smart phone). 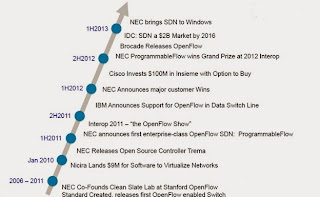 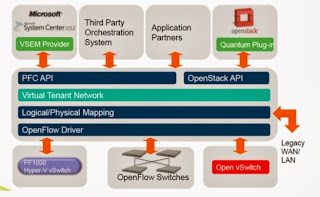 *some data is taken from web