Great Book for Beginners
http://martinrinehart.com/frontend-engineering/knowits/v1/print/pro%20html-pre-proof.pdf
Posted by Rajeev Tiwari at 8:49 AM 1 comment:


The Joint Collaborative Team on Video Coding (JCT-VC) has been established to work on this project.


§  HEVC contributions of the Image & Video Coding Group at HHI

The main themes around this fight can be summed in two main debates:
While companies are fighting this round with no apparent winner so far, there’s another round brewing, waiting just around the corner: the successors of both of these codecs. 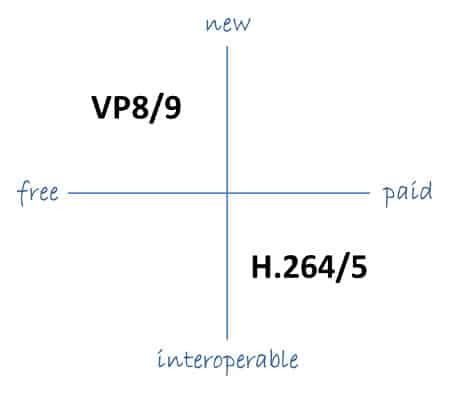 MPEG-DASH White paper
DASH is an extraordinarily moving technology for web producers, a single new standard that should allow them to encode once, and then securely distribute to a universe of players, from mobile to OTT, and to the desktop via plug-ins or HTML5. In addition to not resolving the HTM5 codec issue, it’s also unclear whether publishers will be charged for the privilege of producing files using the DASH spec, which could be a significant negative.
Mozilla has already indicated that they probably won’t support the specification as currently written, and Apple and Adobe have not affirmed if or when they will support the technology
Some of the points to consider are:
Internet friendly:
MPEG-DASH uses standard HTTP protocol. It can be deployed using standard web servers and it work with existing Internet infrastructures, including CDNs, caches, firewalls and NATs.
On-demand, live and time-shift applications:
MPEG-DASH supports on-demand, live and time-shift applications and services with a single framework.
Switching and selectable streams:
The MPD provides adequate information to the client for selecting and switching between streams, for example, selecting one audio stream from different languages, selecting video between different camera angles, selecting the subtitles from provided languages, and dynamically switching between different bitrates of the same video camera.
Ad insertion:
Advertisements can be inserted as a period between periods or segment between segments in both on-demand and live cases.
Compact manifest:
The segments’ address URLs can be signaled using a template scheme resulting in a compact MPD.
Fragmented manifest:
The MPD can be divided into multiple parts or some of its elements can be externally referenced, enabling downloading MPD in multiple steps.
Common Encryption and Multiple DRM support:
The content can be encrypted once and delivered to client supporting various DRM schemes. The supported DRM schemes can be signaled in MPD. (including UltraViolet apparently)
Segments with variable durations:
The duration of segments can be varied. With live streaming, the duration of the next segment can also be signaled with the delivery of the current segment.
Multiple base URLs:
The same content can be available at multiple URLs—that is, at different servers or CDNs—and the client can stream from any of them to maximize the available network bandwidth.
Clock-drift control for live sessions:
The UTC time can be included with each segment to enable the client to control its clock drift.
Scalable Video Coding (SVC) and Multiview Video Coding (MVC) support:
The MPD provides adequate information regarding the decoding dependencies between representations, which can be used for streaming any multilayer coded streams such as SVC and MVC.
A flexible set of descriptors:
These describe content rating, components’ roles, accessibility features, camera views, frame packing, and audio channels’ configuration.
Subsetting adaptation sets into groups:
Grouping occurs according to the content author’s guidance.
Quality metrics for reporting the session experience:
The standard has a set of well-defined quality metrics for the client to measure and report back to a reporting server.

Features:
• Cross platform build system based on cmake that includes Windows, Linux and Mac.
• Open source available and licensed under the LGPL.
• Implements the full MPEG-DASH standard according to ISO/IEC 23009-1, Information Technology – Dynamic Adaptive Streaming over HTTP (DASH) – Part 1: Media Presentation Description and Segment Formats
• Handles the download and xml parsing of the MPD. Based on that it provides an OO based interface to the MPD.
• Media elements, e.g., SegmentURL, SegmentTemplate, etc., are downloadable in that OO based structure and can be downloaded through libdash, which internally uses libcurl.
• Therefore basically all protocols that libcurl supports, e.g., HTTP, FTP, etc. are supported by libdash.
• However it also provides a configurable download interface, which enables the use of external connections that can be implemented by the user of the library for the download of media segments.
• The use of such external connections will be shown in the libdash_networkpart_test project which is part of libdash solution and also part of the cross platform cmake system and therefore usable on Windows, Linux and Mac.
• The project contains a sample multimedia player that is based on ffmpeg which uses libdash for the playback of one of our dataset MPD’s.
• The development is based on Windows, therefore the code contains a VS10 solution with additional tests and the sample multimedia player.

Sources and Binaries:
You can find the latest sources and binaries in our download [1] section and on github [2].


MPEG-DASH   Support in Youtube
From last week onwards YouTube started to serve 50% of its videos in MPEG-DASH. This is true for the YouTube TV application, https://www.youtube.com/tv#/browse - I think this will give a big help for the player deployment. Do not forget that DASH is related to packaging and multiplexing, not to codec.
Encoding will still be a business if it evolves to smart handling of multiple packaging (HLS, DASH, SS, HDS) by reusing the same encoded material (h.264...) and if it integrates smart player device adaptation and content rules enforcement.

Google is also adding Dash to Chrome player (it should be in Chrome version 23).